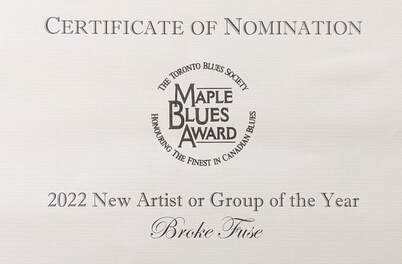 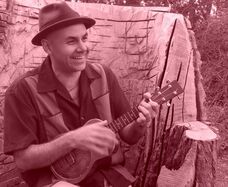 Broke Fuse is a one-man blues band from Toronto, performing original songs along with classic standards. Jay Moonah is the man behind Broke Fuse. He has been active in the Canadian music scene for more than 30 years, and is a former member of a number of groups including indie-roots-rockers Uncle Seth and retro-folk act The McFlies. Jay is a co-founder of the Scarborough Uke Jam, and also plays and sings with the McKenna Moonah Blues Duo.

Broke Fuse hit the stage in 2014, quickly securing open spots for acclaimed artists such as Suzie Vinnick, Tim Williams, Al Lerman, and Greg Godovitz. The debut EP The Underground was released in 2015, with the follow-up Broke Down + Blue arriving in early 2017.
​
2020 saw the release of the full length LP, Why Should I Be Blue? The album was recorded at Moonah's home studio with remote contributions from a variety of musicians. This approach, necessitated by the Covid-19 health emergency, proved extremely successful: Why Should I Be Blue? garnered stellar reviews and airplay from across the globe, as well as two Independent Blues Award nominations. In July 2020, the album reached #1 on the Roots Music Report Canadian album chart.

Following exactly one year after Why Should I Be Blue comes 2021's Rocket Ride. For Rocket Ride, Moonah was determined to lean further into the sonic diversity of the previous album. “I wanted to bring more rock’n’roll energy, but also try some different things and take some risks,” he says. “My own tastes are pretty broad, so with the blues as a foundation I wanted to see how far I could take the music in different directions.”

That approach led to dynamic songs including the title track, “One Shot”, “I Don’t Care”, and “The Ballad of Sonny Shade” sharing space with more introspective offerings such as “Strawberry Moon” and “Hear The Rain”. A multi-instrumentalist who has long been recognized on the Toronto music scene as a blues harp ace, Moonah also stretches out on three harmonica instrumentals, (“The Stephenson Swamp Stomp”, “Agitation”, and “Los Detalles del Diablo”) each in a different style. “Yeah I do like to try different things,” he laughs. “The instrumentals in particular kind of go from acoustic blues to progressive rock to my take on Latin music. They were great fun to put together, as was the whole album.”

The title track from Rocket Ride features contributions from two Toronto music legends: Debbie Fleming (renowned singer and veteran of a variety of groups including vocal jazz act Hampton Avenue) and guitarist Mike McKenna (of McKenna Mendelson Mainline, Luke and the Apostles, and many others). “Debbie and Mike are great friends and such amazing musicians,” says Moonah. “It’s always a treat to collaborate with them, and they each bring something really special to ‘Rocket Ride’ in particular.” The song also features a creative video incorporating historical NASA footage. “When I was a young kid I wanted to be an astronaut – until I realized how much work it was,” chuckles Moonah. “But I’m still fascinated by the space program and science in general. I guess this video is the closest I’ll get to that childhood dream, and I’m okay with that!”

For bookings or other inquiries for either Broke Fuse or McKenna Moonah Blues Duo, please visit the contact page or call 416-885-5341.